Pakao started making soft toy animals in 2009 after she arrived in Malaysia as a refugee from Burma. The Mon Women Refugee Organisation (MWRO) taught her how to sew, while her best friend at MWRO, Thanda, gave her the courage to learn English, sew clothes and make soft toys. In 2012, she arrived in Australia as a refugee, speaking Mon, Burmese, Thai and Malay – and now English. She’s an active member of the Mon Association, joining their bus tours to explore the district, visiting Young to see the cherry orchards, or observing local Burmese and Buddhist celebrations. She enjoys cooking Burmese food for friends and people who’ve helped her along her journey, growing herbs and vegetables in pots on her balcony.

Named after the owls in her village in Burma, business owner Pakao Sorn always enjoyed the sights and sounds of these creatures at night – and decided that the shape of their big body with the little ears would make for a cute, soft toy. After winning a scholarship, Pakao bought two sewing machines and started using traditional Mon fabric to do just that. Today she sells handcrafted owl and dog toys and doorstoppers, a great success at the local markets in Australia. She wants her customers to appreciate the traditional woven fabric of the Mon people. Her products are sourced from Canberra, Sydney and Burma, and inspired by patterns from other fabrics and even cardboard boxes. She wants to keep growing her business and help other women recognise their own strengths along the way. 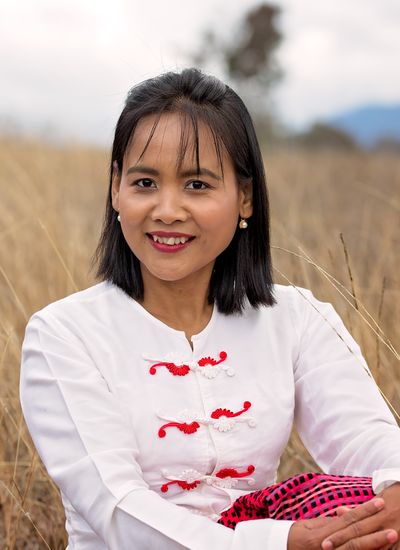