Maureen Unasa was named after a nun in Samoa, Sister Maureen, because her mum had hopes one of her children would commit themselves to God. Her maiden name, on the other hand, is from her dad’s side of the family: ‘Tapusoais’, her father’s chief title in Safotu. When Maureen was five years old, she moved with her mum and dad to New Zealand, and then on to Australia where she’s now living with her five children. She longs for the simplicity of life in Samoa – without the hustle and bustle of the Western world, and with the abundance of natural resources at her fingertips. She dreams for a world that works for everyone. In this world she is an international designer and social entrepreneur helping to change the lives of future generations. Maureen is on her way to achieving this through Samoan Weaving HQ.

Maureen Unasa had been helping with her children’s school art project when she discovered her natural flair for weaving Pacific-inspired art and accessories. Since then she has been re-connecting with her homeland and traditional culture in Samoa, establishing Samoan Weaving HQ business and blog, with the aim to be the ‘go to’ place for all things connected with Samoan weaving. Using traditional weaving practises, she specialises in contemporary pieces such as wedding decorations, costume jewellery and wall hangings, using modern materials including curling ribbon and raffia. Through the business, Maureen is setting up a social enterprise in Samoa to provide villagers with the opportunity to earn an income from their traditional weaving practices. She’s working with her parents to get this up and running, starting in her dad’s local village of Safotu. 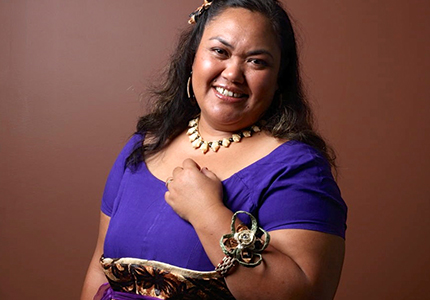 Product from this sister

SHOP ALL PRODUCTS FROM THIS SISTER